A new book on Urban Design for the Knowledge Society attempts to shed light on this elusive concept- with education in formal academic environments struggling to come to grips with the potential  disintegration of its silo-like towers and speciality ‘ ‘ onthe one hand and the distribution of knowledge everywhere enabled by the internet and Google how do we integrate the city throughout its manifest and intangible aspects into education about something which is forming and flowing so fast as to seem unknowable. From UrbanTick

Knowledge is the recourse of our times. In the form of data and information, knowledge is not only the current hype it is the main topic in many areas. The best illustration for this is probably the rise of Google as a company focusing entirely on the management of knowledge or the popularity of Wikipedia an open source project of recording and arguably generating knowledge.

This shift is however, not entirely reflected in the way education of the next generation. In most countries the education system suffers great cuts and reduction of financial support. Education and the gaining of knowledge is increasingly by officials put as something every person is responsible of gaining themselves, probably from Google and Wikipedia. This leaves of course a big gab between services and users and a lot of people without the basic capacity to take part in this beautiful new world, keeping it an exclusive domain for few.

Image taken from e-architect / Science City is the development vision for the university campus of the 21st century. The board of governors of the Eidgenössische Technische Hochschule in Zurich (Swiss Federal Institute of Technology Zurich, or ETH Zurich) formulated a strategic vision as the basis for current and future developments. The campus is required to act as an interface between scholarship and society, somewhere the worlds of business, economics, politics and scholarship can interact. The spatial rendering of this vision is a dense fabric of buildings large and small, squares, courtyards and gardens that provide the ideal environment for research, discussion and development. Thanks to its precisely planned connections to the city and other university facilities, the network also extends to the metropolitan level: from Science City to City of Science. This project features in the book in the section ‘Greenfield Campus’.

On the other hand this also removes knowledge and with it education increasingly from the public space. The remote nature of a lot of education and knowledge building leaves places empty. Through out history campuses were amongst the main elements of place being a major feature of the city. Still today great campuses feature as great attractions and landmarks, even making it into movies.

Nevertheless campuses and places for education, especially higher education still get buit ad are multi billion pound projects. Many are new, but a lot are existing and reinvent themselves. There are of course the archetype campuses Oxford and Cambridge in the UK, but also institutions in the Netherland, such as Delft and Utrecht or in Switzerland the ETH and EPFL campuses and of course in the US for example the MIT campus or the Stanford Research Park amongst many.

‘Campus and the City – Urban Design for the Knowledge Society’ in a gta Verlag publication edited by Kerstin Hoeger and Kees Christianse with contributions by numerous people on the planning and implementation of campuses world wide. The book puts its emphasis on the contextua integration and the potential of syntheses as the generation of place.

Image taken from supertacular / Vitra Campus in Weil am Rhein with the new Herzog de Meuron exhibition building in the foreground. Visible in the back grond is another campus buildings by Frank Gerry. This project features in the book in the section ‘Corporate Campus’.

The book is a result of a conference series inspired by the reorganisation of the ETH Hoenggerberg campus ‘Science City’ in Zuerich, Switzerland. The first conference ‘Campus Design’ was held in 2006 with the following up ‘Competitive Campuses’ with some more events in this series. The conference content has been extended for the book publication with research work undertaken at the Institute for Urban Design (ISB) and was published in 2007.

The discussion around campuses and how to design space for knowledge is very successful at combining different levels as for example architecture with the educational requirements of the new Bologna education plan. This syntheses results in a discussion on urban design that goes much beyond the usual planning context. It is not just for the campus but with the campus in a wider context reaching out to the city and beyond. 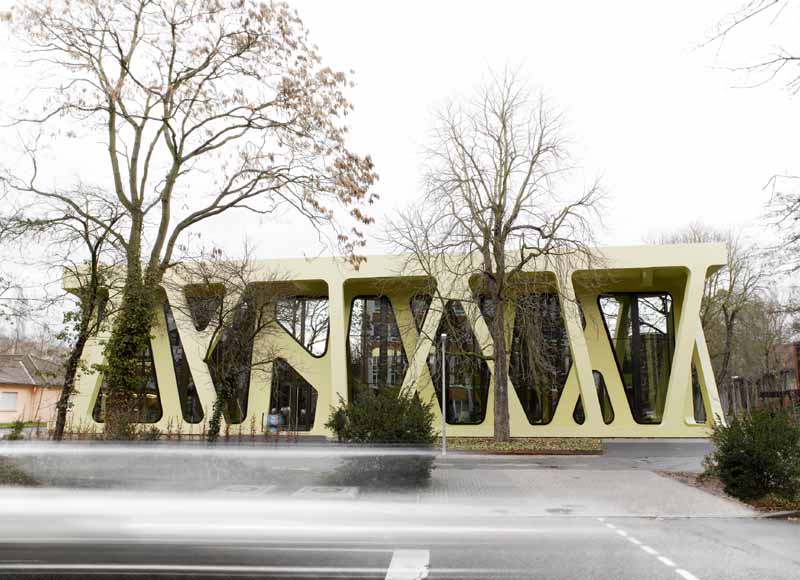 Image taken from supertacular5osa / Mensa Karlsruhe, by J. Mayer H. Architects, is an elastic space, that sits in the center of the Karlsruhe University Campus. As an extension of the already existing facilites, the city of Karlsruhe is building a canteen that will serve the growing number of students. The building becomes the new adress of the campus, negotiating between the identities of three universities as well as between the urban fabric and the Hardtwad forest. The building reacts to this special condition with different stages of porosity. This project features in the book in the section ‘Inner-City Campus’.

The contributions and discussions around specific campuses are structure in four sections. Each section describes a different condition. They can be defined in terms of location as with ‘Inner-City Campus’ or by character as with ‘Greenfield Campus’ or with work conditions and specifications as the section ‘High-Tech Campus’ or also as with the last section on ‘Corporate Campus’ the economic conditions.

Place making has become increasingly difficult, both as a result of the changing technologies but also social configurations. This publication shows in a very practical way how careful examination and far reaching planning can create great places for the network society.

Image taken from KCAP / Campus and the City book cover.