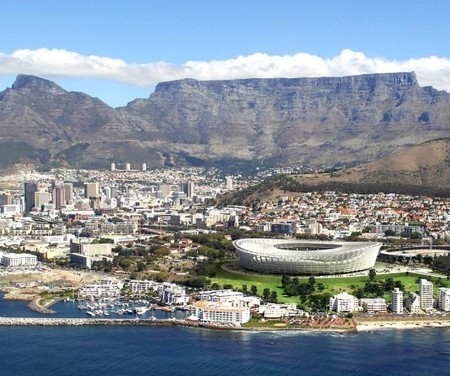 From the window of an airplane it’s all too plain that apartheid has been deeply written into the South African landscape. Even the smallest town appears as two distinct towns. One features a spacious grid of tree-lined streets and comfortable houses surrounded by lawns. The other, its shriveled twin, some distance away but connected by a well-traveled road, consists of a much tighter grid of dirt roads lined with shacks. Trees are a rarity, lawns non-existent. This doubling pattern appears no matter the size of the population: here, the white town; over there, the black township. — Lisa Findley, “Red & Gold: A Tale of Two Apartheid Museums.”

Anyone who drives from Cape Town’s "leafy subrurbs’ to the airport sees the legacy of apartheid in the shacks that line the road, attempts to house everyone in one or two room, poorly designed and badly built shack,s over the 20 years of ANC rule have made no in-road on this spacial legacy   – the mating call of the party to its suporters is that it’s the fault of the past regime – any attempt by  the opposition to call attention to the problems of poor sapcial planning, which is the visibel legacy of Modernism as adopted by the Nationalist govemnemts policy of racial segragation. The economic underpinning of this system are still firmly entrenched inthe city and despite endless planning reports there is still no visible change and the poor are rightly  frustrated – why do they still tolerate their leaders who spend millions on their own houses inthe name of security but are unable to provide  the poor with a viable and urbane civic realm?