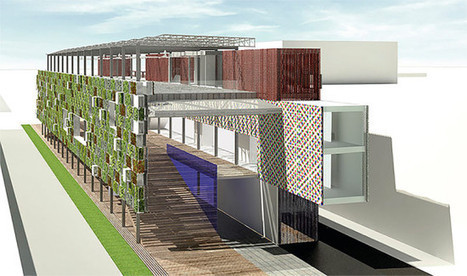 The United States will celebrate one of its most prized national treasures at the next World’s Fair: the food truck. In honor of the theme of the 2015  Milano Expo—“Feed the Planet, Energy for Life”—the American Pavilion, called American Food 2.0, includes street-level food trucks that will serve up some favorite American dishes.

The pavilion’s most visually distinctive feature, is its hydroponic facade—or, a football-field-length,vertical farm that is planted with harvestable crops. “It is as though a typical horizontal field was rotated (think Inception with a farm field standing in for Paris) to become the side of a building,” said Biber Architects in a statement. “It’s not our proposal for serious urban or vertical farming, which is usually indoors, but a didactic display talking about the past, present, and future of the American farm, and the American diet.”