The following interview is an excerpt from the Journal of International Affairs spring/summer 2012 issue, “The Future of the City,”

As cities grow in importance, so too does architecture. Architects are playing a leading role in thinking about the future of cities and building structures that will define urban life for hundreds of years to come. Rem Koolhaas is a leading urban theorist and a Pritzker Prize–winning architect who is engaged in building projects around the world. He co-founded OMA, the Office for Metropolitan Architecture, which is receiving international attention for its recent completion of an enigmatic new headquarters for China Central Television in Beijing. In an interview with Paul Fraioli of the Journal of International Affairs for its latest issue “The Future of the City,” Koolhaas discusses how the economic and cultural changes of the 21st century are transforming world cities and also the practice of architecture.

Journal of International Affairs: Globalization is making it easier for corporations and developers to do business in cities around the globe. Is this having an effect on the practice of architecture in cities or on the kinds of projects that clients are demanding?

Koolhaas: The question is so pertinent that it is almost unanswerable. Things are changing enormously in almost every sense. The effects of globalization have been positive and negative. My generation of architects is the first that could work almost anywhere in the world. We had the option to repeat the same building everywhere or to push ourselves forward, to create an encounter between ourselves and the local culture. This has been incredible for OMA because we have had a deep encounter in China creating the CCTV building and another in Qatar. It is a three-dimensional anthropology lesson and I think our entire office has been transformed by these encounters. If you take architecture seriously and assume your responsibilities, exchange can be a very rich thing. The downside is that profit-driven repetition is so common.

Journal: How do major urban architectural projects impact the national and cultural identity?

Koolhaas: This repetition I just mentioned causes anxiety about identity. There is a natural reaction from citizens and from governments when their cultures are not reflected in urban building projects. This often comes up in the Middle East. So many international architects make it their business to be contextual. As a result, their projects will feature doves, camels, falcons and other first-degree symbols of local history.

Remnants of these differences still exist. For example, a high-rise in Singapore is inhabited in a very different way from a high-rise in the suburbs of Paris or a high-rise in China. Each of these cultures, which once had its own form of speaking, is not trying to resurrect its old language, but is interested in defining and asserting its uniqueness again.

END_OF_DOCUMENT_TOKEN_TO_BE_REPLACED

OMA is to oversee the transformation of a building in Venice to a shopping centre: What does this indicate to us that the author of Singapore Songlines which criticizes the hollowing out or Disneyfication of Singapore here contributes tot eh same situation in the worlds most famous “theme park”  What  wlll it look like, this Theme within a Theme – how we we differentiate the significance of Venice from its signifiers?  Will Koolhaas’ superior “Starchitect” status improve the lagoon cities sinking feeling?

Benetton to build shopping mall in historic Venice building. The 16th-century Fondaco dei Tedeschi has been abandoned for year.

Italian clothes maker Benetton signed a deal to restore a historic palace in Venice and turn it into a shopping center as the watery city taps the private sector to help fund costly projects.

The 16th-century Fondaco dei Tedeschi has been abandoned for years and its sale and restoration are estimated to be worth around $130 million although the details of the agreement were not immediately known.

The building, which was the headquarters for the city’s German merchant community for centuries, also served as Venice’s central post office in the 20th century. It is located on the Grand Canal near the famous Rialto Bridge. “Benetton’s proposal is very good,” Venice mayor Giorgio Orsonisaid, adding that the project would help with “the revival of the historic centre”.

Dutch architect Rem Koolhaas is overseeing the restoration and Benetton said the new centre would employ around 400 people and draw crowds of visitors. Orsoni drew controversy with the art world earlier this year by funding the restoration of the Bridge of Sighs by allowing advertisers including jewelry giant Bulgari to drape giant billboards over the bridge during its restoration.

Within the framework of a Russian “urban renaissance” a continuation of the critique of current  architecture and its lack of urbanity now radically implemented in a research and and educational program led by Rem Koolhass and OMA amongst other luminaries of the ‘architecture’ profession somewhat ironically in that the critique of complicity in the depletion of meaning in the face of individualistic and materialistic control should find a place in contemporary Russia where the intensity of oligarchic materialism seems at  a peak! This is well worth watching if you are at all interested in relevance and social impact of our design interventions. 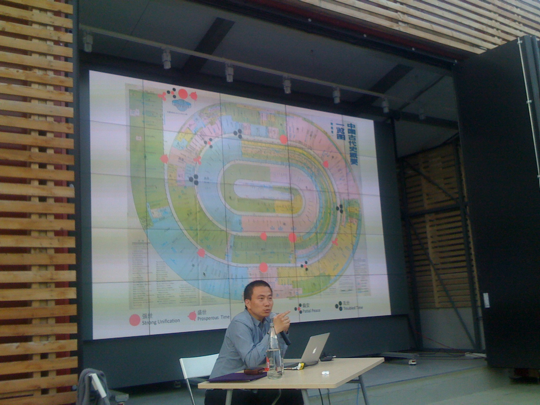 Jiang Jung, Strelka instructor and chief editor of Urban China, presenting a study of geopolitics and urbanization in Russia and China.

Strelka is located on the Moscow River in an adapted section of the former Red October Chocolate Factory. It was conceived during a casual conversation among friends at the Venice Biennale 2009, based on shared concern over the course of urban development under former mayor Yury Luzhkov. This group of design and media luminaries — including Alexander Mamut, once known as “the Yeltsin family banker” — inspired Rem Koolhaas and OMA/AMOto develop and implement an educational program aimed at preparing designers to address complex problems in Russia and around the world. The institute was announced at last year’s Venice Bienniale and the first group of students began in October.

OMA has won the competition to design the new Parc des Expositions (PEX) in the innovation zone of Toulouse, in southern France. PEX is conceived as a new gateway to the city and will host exhibitions, conferences, and concerts. The 338,000m2 project is designed to be a compact mini-city – an antidote to the sprawl of a standard exposition park, and a means to preserve the surrounding French countryside.

Surpassing three submissions by internationally-renowned competitors, the project, led by OMA’s director of French projects Clément Blanchet, will be completed by 2016. Blanchet commented: “This project is not only about architecture, but rather infrastructure. It’s a condenser for diversity, a machine that can promote an infinite amount of possibilities.” END_OF_DOCUMENT_TOKEN_TO_BE_REPLACED

Further reviews of essays from Ecological Urbanism by Jason King of landscape+urbanism:

A related follow-up to the essay by Koolhaas, this short essay explores Zeekracht, a master plan for the North Sea, driven by it’s “high wind and consistent wind speeds and shallow waters…” making it “…arguably the world’s most suitable area for large-scale wind farming.” The project master plan (below) outlines the strategy.  “Rather than a fixed spatial plan, proposes a system of catalytic elements, that, although intendted for the present, are optimized for long-term sustainability.” (72) 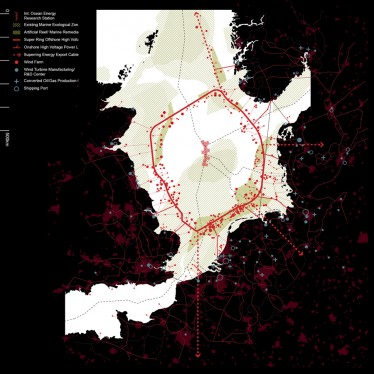 From an ecological perspective the proposal looks to incorporate elements call ‘Reefs’ which are described as “simulated marine ecologies reinforcing the natural ecosystems (and eco-productivity) of the sea.” (72) END_OF_DOCUMENT_TOKEN_TO_BE_REPLACED