We reported on Singapore’s plan for Bishan Park back in late 2009 (‘Kallang River to reappear in Bishan Park‘) and the plan has now come to fruition with Singapore’s Prime Minister recently opening the park to the public. The design was undertaken by Atelier Dreiseitl

Mr Herbert Dreiseitl, Founder and Partner from Atelier Dreiseitl stated back in 2009.

“As a strong new impulse for the future, an infrastructure that can be appreciated and accessed by citizens which at the same time respects the environment in a sustainable manner also brings about a subtle change in behaviour and thinking and it is through this change that we can begin to create places which are vibrant, healthy and full of socio-cultural liveliness. Bishan Park has already the beginnings of this, and bringing the river and water element back to the people, will further enhance the place.

The restoration of the river has created a huge variety of micro-habitats which not only increase biodiversity but the resilience of species within the park, meaning their long term ability to survive is greatly improved.Soil Bioengineering
The use of soil bioengineering techniques to stabilize the river banks is a first for Singapore and a new reference for soil stabilisation in the tropics, which have otherwise rarely been used or documented.In 2009, a test reach was constructed, testing 10 different soil bioengineering techniques and a wide variety of native plant species along a length of 60 metres at one of the side drains in the park. Seven of these techniques were then selected for use along the main river. These include fascines, rip-rap with cuttings, geotextile wrapped soil-lifts, brush mattresses with fascines, reed rolls, planted gabions, and geotextile with plantings. As soil bioengineering is largely untested in the tropics and South East Asia, the test reach was used to refine the selection of appropriate techniques and plants, as well as the most efficient and effective construction methods. Extensive systematic testing was carried out, including measuring the depth and tenacity of root development

And an article on the opening

A recent post on [polis] led me to reread Rem Koolhaas’ seminal text and a critique of it in QRLS, which reminded me how when we first visited Singapore in 1986 I noticed how compliant and alienated the populace appeared , with the young people withdrawn in their headphones and sequestered in blank blocks of high rise apartments with washing hanging from ropes strung from the balconies and amazed at how, though the city ran smoothly and everything appeared absolutely perfect, there seemed to be an undercurrent of dis-ease, only once we ventured away from the main streets did we find  “real” people  of many nationalities as vendors of  foods and artifacts from the surrounding regions diverse ethnic groups. While buying some cloths and puppets from Indonesia and Sulawesi we chatted to the vendors who still lived in shophouses clustered together in streets by their nationality we discovered that they were soon to loose their homes to upgrading and “theming” – just like we saw had already been done in the Chinese and Indian quarters. 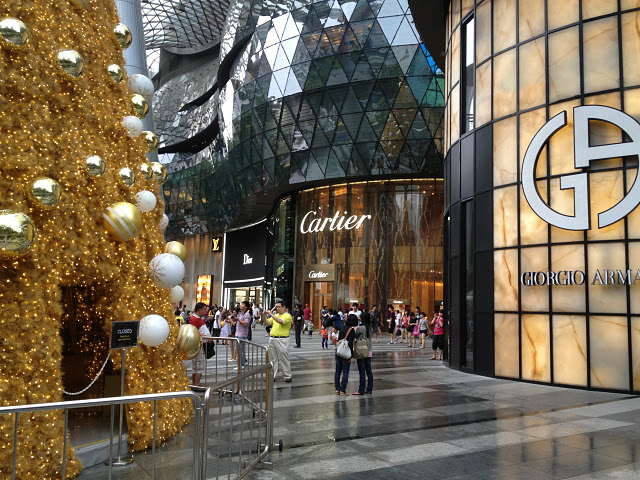 The critique of Singapore by Rem Koolhaas in S,ML,XL is directed at this loss, not of a historic district worth saving in itself, but the loss of the roots of the people who make the city what it is, this same erosion taking place in our cities casts a shadow on our modernity, how will we retain our roots yet make space for the ‘now’ and the ‘just now’?.

From [polis] “Taking Singapore’s Orchard Road as a linear slice of urban fabric, it may be read as representative of both the city-state’s remarkable capacity for economic development and complete disregard for historical strata. In an awkward attempt to impose a blanket of elite market-driven exchange without the frayed edges and individual liberties of Western urban models, Singapore has stirred heated debate over its cultural authenticity. What is the genuine essence of a city that functions in a constant cultural grey zone, importing multinational corporations and citizens from abroad?”

Singapore’s tabula rasa developmental logic has subtracted any perceivable contextual background, adding only glamorous foreground. The Potemkin Metropolis of Singapore — more harshly described by William Gibson as “Disneyland with the Death Penalty” — is a model for rapid urbanization in a part of the world where priorities diverge from those established in other global cities. Food poverty, defective infrastructure and destructive flash floods continue to shape the reality of countries in the region. Singapore developed by betting on qualities that rarely push cities to greatness in Europe and North America. It implemented a rigid, authoritarian ethos that appealed more to immediate conditions than to the cosmopolitan lifestyles of New Yorkers and Londoners. The city-state renowned for its prosperous economy, the banning of chewing gum and effective strategies against crime remains the odd man out within a broader geographical context accustomed to hardship and scarcity.

“It is shown with pride, not shame. They think there will be no crime. We think there can be no pleasure.” (Rem Koolhaas) END_OF_DOCUMENT_TOKEN_TO_BE_REPLACED

Despite tree-hugging tendencies, I'm trying my hardest not to hate trees and other blossoming urban flora right now as they wake up from a long winter and their wanton pollination causes my awful allergies. To feel a little better, it's a good time to remember that while urban forests dish out suffering to those of us with sensitive immune systems, they do take a lot of abuse from us too. In late February the New York Post reported a shocking exp … Read More

“Gustafson Porter recently received a commendation in the category Big Urban Projectsat the MIPIM AR Future Projects Awards 2011 for the project Bay East, Gardens by the Bay in Singapore. Director Mary Bowman will attend the MIPIM Award ceremony on 9 March 2011 in Cannes”